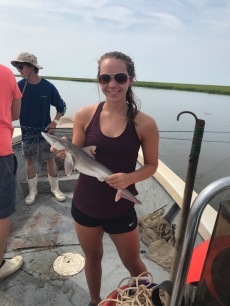 The Approach: In my previous post, I mentioned the importance of sea turtles to ecosystems and ecotourism. While very important, the populations of these endangered animals are declining largely due to human impacts on our oceans. Headlines of sea turtles washing up on shore from such things as being strangled by plastic or boat strikes is no new occurrence. Since sea turtles are declining for reasons largely caused by us, so it is up to us to save these beloved animals. This study aims to investigate the stability of two important health indices, RNA and plasma protein in sea turtle blood, at different temperature treatments over time.  These indices are frequently used by researchers to answer health related questions. Therefore, my study will hopefully aid other researchers in determining if their samples are of the right quality to measure these indices.

For this project, whole blood was obtained from loggerhead sea turtles off the coast of South Carolin. The blood was collected in either Vacutainer blood collection tubes containing sodium heparin or PAXgene tubes. Sodium heparin tubes contain an anticoagulant and are typically used for blood collection. PAXgene tubes contain an RNA preservative; therefore, are best suited for RNA analysis. The sodium heparin tubes used for plasma were centrifuged on the boat to separate the blood components (i.e, plasma, white blood, and remaining cells) while the PAXgene tubes for RNA were left unspun. Once in the lab, the tubes were divided out into approximately 1.5ml aliquots in order to subject them to different treatments. Plasma was used for the plasma protein treatments while whole blood was used for the RNA treatments. Treatments in this study included 4⁰C for seven days, 20⁰C for three days, delayed freeze time, and never frozen. There were also treatments that lasted twenty-eight days consisting of storage in cryogenic conditions (< -150⁰C), -80⁰C, and -20⁰C (frost-free and non-frost-free freezers). Once the treatments end, the plasma will be analyzed for protein concentrations via plasma electrophoresis, and the whole blood will be analyzed for RNA quality via RNA isolation followed by a bioanalyser to obtain RNA integrity numbers (RINs).

As a result of the study, I hope to determine the conditions at which plasma proteins and RNA are most stable and begin to lose stability in order to aid scientists with their research. By knowing these conditions, this will hopefully guide others in deciding how to store samples along with which ones are best suited for a variety of analyses. In order to help the sick and endangered sea turtles, the highest quality of research will be necessary which means high quality data. I hope this study will guide researchers to make that possible.

I would like to thank Dr. Jennifer Lynch, Jennifer Trevillian, and Jennifer Ness with the National Institute of Standards and Technology for being my supportive and awesome mentors. This project was made possible by the samples collected by Dr. Michael Arendt and the funding from the National Science Foundation (NSF DBI-1757899) supported by the Fort Johnson REU program.