Findings: This summer I studied growth rates of male and female juvenile blue crab in different salinity treatments to determine if sex or salinity affects growth rates. For background information refer to my previous blog post discussing the problem, and my methods are discussed in another previous post. The data we collected on the individual crabs in each treatment were analyzed in a number of ways to compare the growth of males and females in both high and low salinity.

The first way we analyzed growth rate was by calculating a body volume index using the crabs’ body measurements (volume= length x width x depth). Their initial volume was compared to their final volume to find the percent change in size. The percent change was averaged for males and females in each tank, and the average of all of the low salinity males, females, and high salinity males and females is shown in the bar graph below.

As you can see, there are greater growth rates for both males and females in low salinity. An ANOVA was run on this data and confirmed that the effects of salinity were significant. However, sex was not a significant factor. This does not support my hypothesis, as previous studies have shown greater growth rates in high salinity. Before discussing why this might be, let’s look at the wet weight data. Growth rate using wet mass were calculated in a similar fashion as the body volume index using the crabs’ initial and final weights, and averaging them for each tank. The averages for males and females in both treatments are shown below, and you’ll notice that it shows a slightly different result. 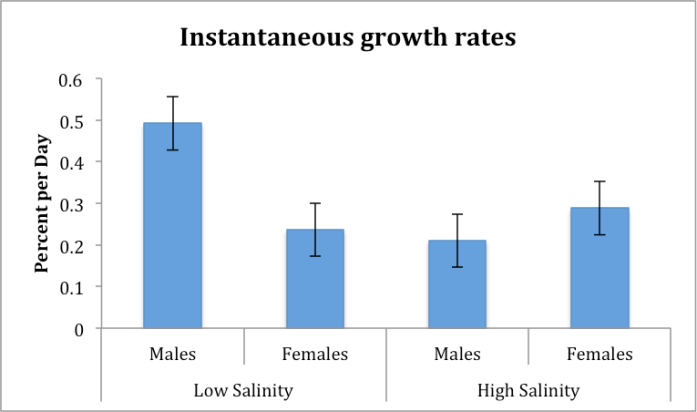 ANOVA results of this data show that neither sex nor salinity significantly affected growth rates, but the interactions between sex and salinity were significant. Post-hoc analysis showed that there were marginally significant differences in the growth rates of males in low salinity and males in high salinity. This is more similar to the trend I originally hypothesized.

So what did we learn from all of this? This study indicated that male blue crab grow at slightly greater rates in low salinity than high salinity, and that overall blue crab grew faster in low salinity. While this conflict with findings from previous studies that have found the opposite, there are some studies that have noted blue crab gained more soft tissue mass and molted more rapidly in low salinity. This same study also did not see a difference in the body size change after molting despite this greater weight increase, so I think that might be what we saw here since the body size and wet weight results differed slightly. This may not have negative implications on the blue crab seem to grow well in a wide range of conditions, but climate change may increase salinity in estuaries. This may affect the range of habitat males and females use since it seems males prefer low salinity, or somehow affect the growth of juvenile male crabs. While this may not have significant effects on population abundance, it is still useful for resource managers to know what habitats blue crab are utilizing and how the population may respond in the future. This way they can effectively assess potential management actions for the blue crab fishery so it successful for years to come! 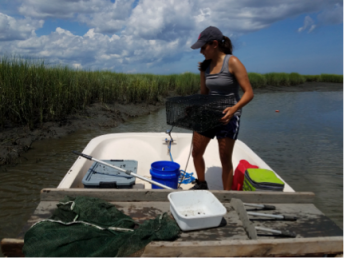 The pictures above are me doing field work! Picture credit: Stevie Czwartacki

I would like to acknowledge and thank the Fort Johnson REU program and NSF DBI-1757899 for making this research possible, the South Carolina Department of Natural Resources, Jeff Brunson and Stevie Czwartacki for their help in the field and sharing their knowledge with me and my mentor Dr. Michael Kendrick for his guidance and support this summer.